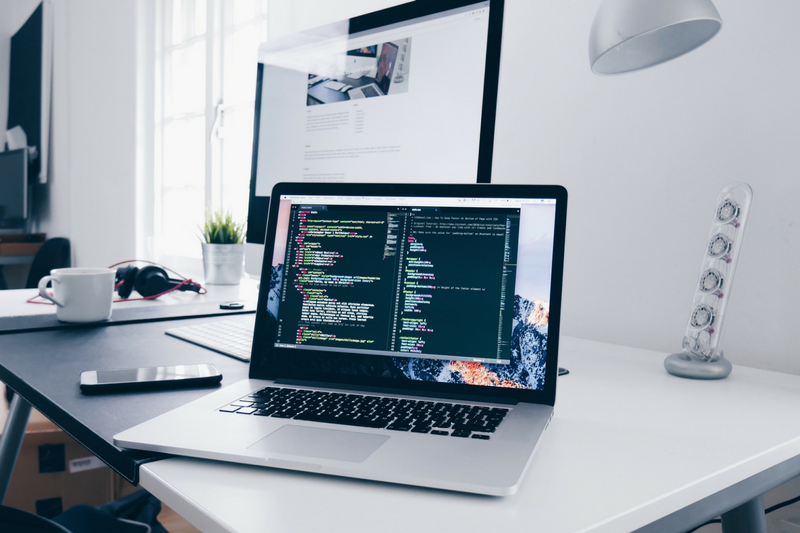 If you’re not a digital guru, it’s possible you don’t know the difference between a web designer and a web developer. You might even be using the terms interchangeably. It can be confusing, because some professionals have both design and developer skills—but they aren’t the same job and often you need to hire two different people to get the work done.

A web designer is in charge of the look and layout of your website. They’ll help you dictate what colors to use and where, which images and calls to action belong on your homepage, and other similar visual aspects of your site. A web developer, on the other hand, is the bricklayer of all that work. They take the visual design and actually build the code that makes it functional and useable using a programming language such as HTML, CSS, or Javascript.

If you’re like most business owners, it’s likely you’ll have a better grasp on the designer’s job than the web developer’s. Because of this, it’s important to hire and work with a web developer who really knows what they’re doing because you’ll need to trust them to do awesome work that you can’t as easily oversee.

Here’s how to get connected with, interview, and hire an excellent web developer.

The Two Qualities of a Good Developer

Research shows there isn’t a correlation between effectiveness and efficiency. A fast coder isn’t necessarily good or bad, and a good coder isn’t necessarily fast or slow. The best developers do both: they create quality code in the shortest amount of time. This means you need to screen on two scales when hiring a web developer: their effectiveness (how good their code is) and efficiency (how quickly they can work).

This also means it’s worth paying a higher rate for an efficient, effective developer. If you control for quality (i.e., only look at developers who produce good code), you’ll still find the most efficient programmers are 3-4 times faster than the least efficient ones.

For example, say we’ve screened out all the web developers who cannot produce quality code (more on that in a minute). So, we’re down to two candidates, Abby and Zach. Abby can work three times as fast as Zach, but she charges $150 an hour. Zach only charges $75 an hour. You might be tempted to take Zach’s bargain rate, but you’ll hurt yourself in the long run.

How to Screen Web Developer Candidates

Still assuming you’re not a technical person (no judgment, as most of us aren’t!), you’re probably wondering how to assess a developer’s speed and quality of work during the interview process.

I’d recommend screening for the “soft stuff” first. Primarily, you need to find a developer whose work style and communication skills match your own. In doing so, you’ll already be able to overcome the barriers between their technical expertise and your layman’s knowledge of web development.

Second, during the interview you need to explain exactly what you would want the developer to work on. Be specific. Then ask, “How would you approach this problem?” Listen and probe for how your candidates solve problems, would communicate with you, and keep themselves accountable. If you have a friend or colleague with technical experience, it might be worthwhile to ask them your questions first, and they can help you create a simple scale of “Good, Better, Best” potential answers to measure against during the hiring process.

Finally, consider paying to have your finalists take an online coding test from sites such as Codility, a developer-specific hiring tool where you can compare the finalists on the dimensions of efficiency and effectiveness. Or if you want to screen before you conduct any interviews, you can use a site called Hundred5.

How to Pay Your Web Developer

There are pros and cons between paying web developers an hourly rate and on a project fee basis.

Hourly rates are useful because you can ramp up and down as needed to meet deadlines or change the scope of work, and you’ll still only pay for what you get. It’s a simple model that tends to be pretty clear cut on both sides of the contract.

On the other hand, there is less of an incentive to work quickly and meet deadlines on the hourly system, and it’s difficult to monitor the costs your web developer is incurring. Plus, to complicate matters, many developers have an hourly cap where they switch to overtime rates if your site requires too much back and forth or edits.

The hourly rate payment model is a good option if you’re working with a developer you know well and trust.

The nice thing about agreeing to a project fee with your developer is there is budget certainty: it’s a known cost from the beginning of the project. There is also incentive for the developer to work both quickly and effectively to boost their own bottom line by freeing up time for their next big project.

The lines of a project fee can become blurred, however. You might find yourself having a debate about what is or isn’t in the scope of work, and changes to that scope are less flexible. For this reason, the details in your contract need to be crystal clear ahead of time—which parts of the site will be built out, how many revisions are allowed, etc.—so both parties understand what they are agreeing to in exchange for the fee.

It is possible to work out a mixed agreement with your web developer. Most hybrid models involve a fixed monthly retainer with the ability to opt out with 30-days notice. You’ll agree on the general scope of work and roughly how many hours it would take per month to establish this fixed monthly rate.

In the agreement, you’ll both decide ahead of time what deliverables and goals each month requires, with room for troubleshooting and reprioritization throughout the duration of the project. If the developer consistently over-promises and under-delivers, you can fire them. Relative to the hourly rate model, some months you’ll “win” by getting a little free time if tasks take a little longer than expected, and some months you’ll “lose” for the opposite reason. In the end it will all come out in the wash! On the project basis side of the equation, you’ll have much more flexibility with the scope and timing of the project.

Where to Find Good Web Developers

Similar to web designers, there are plenty of options online for connecting your company with a talented freelance developer, from word of mouth recommendations to online marketplaces and meetups. As we mentioned earlier, you might even be able to find someone who can handle both sides of the project at once, although this dual skill set is rare. Therefore, if you’re unsure, I’d start by hiring two separate people. This allows design experts to focus on design and development experts to focus on development.

Remember: Don’t be afraid to fail. You might mess up your first freelance hire, especially when you are connecting with someone whose skills are so different from your own. But you’ll learn from your experience. Don’t be discouraged, manage your downside by scoping small projects, correct your course, and try again.

What the experts say about niche media’s future

The cure for advertising woes: content your audience actually cares about

Free Lunch: The Power of Segmentation

Any cookies that may not be particularly necessary for the website to function and is used specifically to collect user personal data via analytics, ads, other embedded contents are termed as non-necessary cookies. It is mandatory to procure user consent prior to running these cookies on your website.